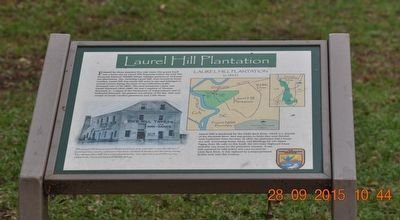 Savannah National Wildlife Refuge includes portions of thirteen former rice plantations. Ten (including Laurel Hill), were located in South Carolina. Laurel Hill was nearly 400 acres in size and belonged to several owners during the years of rice cultivation in the Savannah area (1750-1860). The most prominent owner was Daniel Heyward (1810-1888).

Laurel Hill is bordered by the Little Back River, which is a channel of the Savannah River. Rice was grown in fields that were flooded with fresh water from the river. In 1825 the plantation had a house, rice mill, winnowing house, barns, and dwellings for 150 slaves.

Facing three live oaks on the knoll on your left as you enter the drive, the two-story clapboard house probably was home for the plantation overseers. A rice mill operated by tidal power was once located on Little Back River. It was replaced by a steam-powered facility built near this location in 1833 that operated until 1880.

Later the mill was converted into the Rice Mill Tavern, notorious for drunken and disorderly activity. The Tavern was abandoned by 1934, when the Laurel Hill tract was added to the Savannah National Wildlife Refuge.

Rice on the Refuge